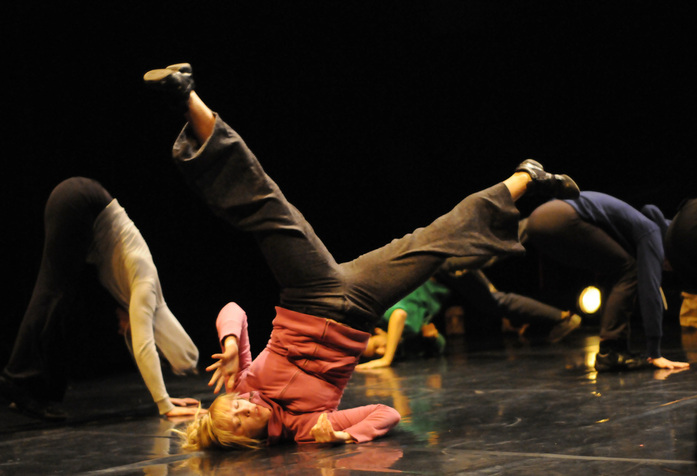 Photo by Cindy Lopez.
As most people know, there's an overwhelming amount of competition in the world of show business. The arts and culture sector is no different, especially when we talk about professional dance. Part of this competitive aspect comes from the lack of work opportunities existing for emerging dancers and choreographers. Even then, some very talented established artists have a difficult time earning a living from dance alone. For example, according to a research done by Le Regroupement québécois de la danse, which represents professional dance artists, 63 percent of dancers earn less than 15 000$ a year from dance related engagements (1). The low income margin is set at 16 193$ for a single person with no child (2).

A lack of opportunity is in fact the main reason Amy Blackmore says she launched the Bouge d'ici Festival: "Our journey began in the fall of 2008, when I was in my second year of dance at Concordia University. I had just presented my first choreographic work as a part of the program and wanted another opportunity to present it. I was also feeling frustrated with the lack of opportunity for me to present my work in a professional context. It seemed that my only options were Arts Matters and the Fringe Festival. With the encouragement of a teacher of mine, I took matters into my own hands, brought a group of fellow students and we organized the first Common Space: L'Espace Commun in February 2009 in a small gallery called Ctrlllab with a capacity of 35 seats. At the time, there was no festival. We simply mentored each other, danced in each other's pieces."

What was at first a smart initiative with limited reach quickly turned into a much appreciated outlet for choreographers of all networks, shares Amy Blackmore: "every year, more and more artists apply (from 10 in 2010 to 27 for this year) and our reach aims further and further. We started as a very "Concordia University centric" event, but now we receive applications from UQAM, Concordia, LADMMI and even the theatre community."

The festival accepts project submissions from emerging artists without strictly defining what emerging should mean, says Amy Blackmore: "Applications are open to all artist who identify with being an emerging dance artist (this can mean crossing over into dance from theatre, still studying in school, having graduated 10 years ago and still slowly emerging). We do not define what "emerging" means, we let applicants decide. All choreographic works must have a history of presentation." They then select 10 candidates based on the following criteria: "The need that the artist has for the opportunity. The feasibility of the plan the artist has to rework, remount and evolve their work. The overall quality of the work."

What's particularly interesting about this festival is that it comes with a valuable extra to its visibility: "Once selected, the choreographers are partnered up with mentors from the dance community. Mentors commit to at least 6 hours of time with them. This can be over coffee, in studio, etc. We also have a showings night where the choreographers show each other their works in progress and give each other feedback. This last week leading up to the show, my associate artistic director, Allison Elizabeth Burns and myself, have been running around to rehearsals giving everyone some last minute guidance."

Last year's edition received very good feedback from the Montreal community, explains Amy Blackmore: "Last year, we continued to present workshops, introduced the Bouge d'ici Cabaret and acquired mentors from outside our circle for the first time (such as Sasha Kleinplatz from Wants&Needs and Jeremy Hechtman from MainLine Theatre). Nearly every performance was sold out, therefore we have decided to add a 4th Common Space: L'Espace Commun for this year's edition."

However, this Festival hasn't been free of its share of obstacles in order to make it what it is today, shares Amy Blackmore: "Our main challenge has never been a lack of passion! What has been difficult is that we operate on a very small budget (we hold fundraisers and accept donations - I've also put quite a bit of money into the project myself, especially in the first few years). This means that nearly everyone involved is a volunteer. We work very hard, but we can only do so much. Although I'm known to dream big, I've had to slow my plans down and allow us to grow organically and bit by bit. This has also made it difficult for us to acquire equipment needed for the production."

Fortunately, where there's a lack of money, you can sometimes count on generous people from the community to help out: "with the generosity of friends and connections, we have always managed to pull through. For example, the dance departments of Concordia University and UQAM as well as the MainLine Theatre have generously helped us out with some production needs."

Amy Blackmore seems determined to keep pushing this festival to the peak of its potential: "We hope that the festival continues to grow at a comfortable rate. Our mandate is consistently evolving. We started with providing an opportunity for emerging choreographers to show their work, to... choreographers to evolve their work with the help of mentors, to now including the public in our mandate by encouraging and acquiring new audiences for the next generation of dance in Montreal. We like to think that our festival is approachable. We do have big plans for next year, our 5th edition! We just became non-profit, therefore, we will begin to apply for funding for next year's edition shortly."

Perhaps, one day this new festival may grow to be as big as Festival TransAmériques! Who knows? Everything that's ever become enormous was started by a handful of passionate souls with no money, including international billion dollar company Cirque du Soleil. There's no doubt that this initiative answers a very urgent need, so now we have to see if the audience and funding will meet these emerging artists halfway.