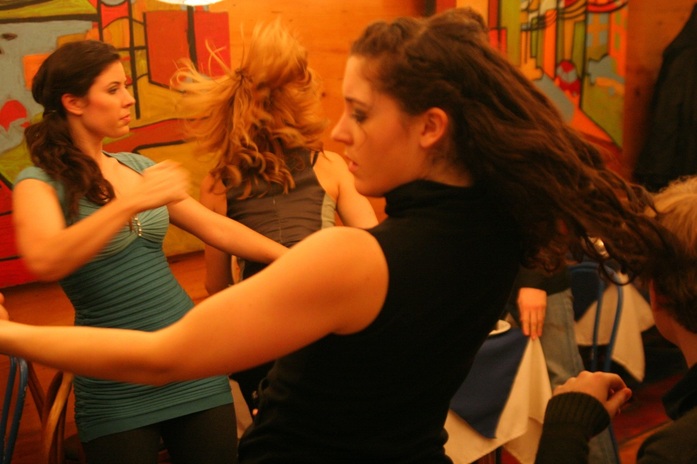 Photo of the short dance film So There's This Girl choreographed by Amy Blackmore.
Amy Blackmore will be presenting her latest work entitled So There's This Girl tonight at Mainline Theatre. This short dance film was inspired from a prior piece she presented in 2009. She explained to us how the film took shape: "After our final performance of the work, I had a strong desire to mould an atmosphere around the two dancers and to give it context. Bis Films agreed to partner with me on the project and away we went! It was a long process because we produced it without the aid of grants and we were determined to aim for a slower quality process over a quick and easy get-the-project-done-and-over-with-process."

Since her studies in the dance program at Concordia University, Amy has been keeping very busy with multiple roles within the Montreal dance and theatre communities. She founded and is currently the Artistic Director of Bouge d'ici Dance Festival, the Director of the well-known Montreal Fringe Festival as well as the President of Le Regroupement des évènements pluridisciplinaires indépendants de Montréal. As an artist, she produced, directed, choreographed, performed and assisted for the work of many companies and events such as Just For Laughs, Crystal Pite's Kidd Pivot, OFF-TA and RUBBERBANDance.

Playing multiple roles of importance within various arts organizations in Montreal, this sense of connectivity and togetherness is also found in her work. "My desire for openness, opportunity and community is reflected in my dance. I value the role of every dancer in the process. Dance isn't merely a discipline of art that I practice, it's a unifying factor of a community that I wish to foster as much as I can. I think that's why So There's This Girl is like a chain. Every dancer experiences a continuous role in the choreography, whether they are in the shot or not. This made it interesting to capture the choreography with the camera. Capturing a single moment for one shot of the film, meant greasing up the machine and having it start from the beginning over and over again. Each moment could only be manifested if the chain-like mechanisms were allowed to begin from the start."

Amy Blackmore has also collaborated with theatre artists and companies such as with Fallen Angel Productions, Montreal Shakespeare Theatre Company as well as MainLine Theatre. Drawing from certain aspects of acting to further define her style, she incorporated some of them into the process she uses as a choreographer: "Character, intention and narrative also factor heavily in my work. Once the parameters were given to my dancers, I encouraged them to work within their own movement signatures."

So There's This Girl is projected to have a life beyond tonight's screening as Amy will be reaching out to other outlets to have her work seen: "The film will be screened at various dance and film festivals in the new year. We are collecting donations on Monday at the screening to help cover the costs of festival applications. We will be announcing future screenings after Monday evening." Other than this film, Amy will be keeping busy with other creations she's involved in: "I am currently writing a new play, and at the beginning stages of the creation of my next choreographic work for stage."

Tonight's screening of So There's This Girl is free of charge. To have more details about her work or the event, visit Mainline Theatre's website.
http://www.mainlinetheatre.ca/en/spectacles/so-theres-this-girl-2011-film-premiere