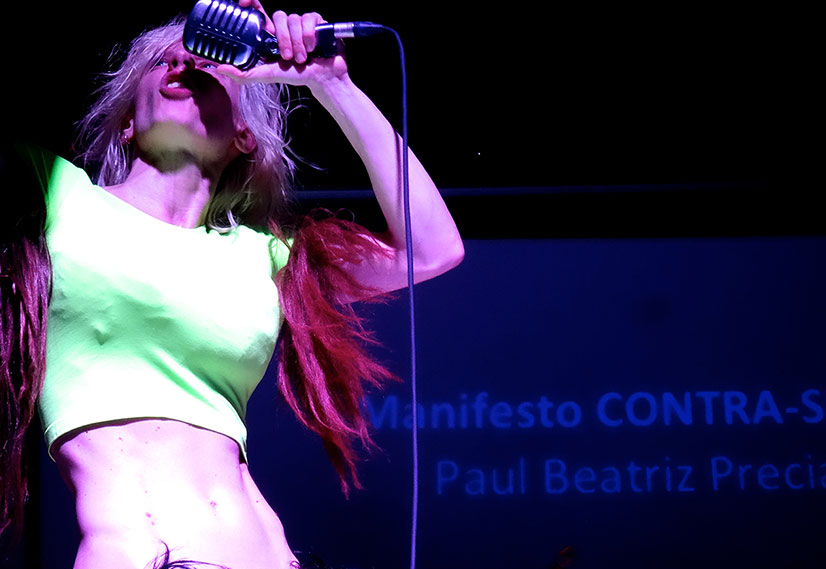 © Ilaria Scarpa
Usine C will be presenting Motus Company’s show MDLSX from March 23rd to the 25th. The piece, directed by Enrico Casagrande and Daniela Nicolò, will be performed by Silvia Calderoni. Loosely based on the performer’s life and experiences, the show takes the audience on a multisensory ride during which a wide array of musical styles are explored. The three collaborators generously shared insights on this undertaking. First off, Daniela Nicolò tells us about the inspiration of MDLSX: "During the last few years we asked Silvia several times to play characters in between, with an undefined sexuality like Ariel in Shakespeare's The Tempest or Antigone. Then in Eugenides’ Middlesex we found, among the many characters, the incredible, fascinating story of Calliope (Call), the protagonist. This time it was different, no armour or shield…! I, as a Dramaturg, found among the many pages of the novel some suggestions that fit Silvia’s story and her appearance and we mixed these suggestions with some very important writings in gender studies (like Judith Butler, Donna Haraway and Paul B. Preciado…) with the support of some videos shot during Silvia’s childhood and adolescence… MDLSX was born!" She also explains how there is a fine line that is blurred in this show, between the performer's life and their creative freedom: "Eugenides’ novel inspired us. It was a good starting point to go deeper and deeper in intimate but, at the same time, universal matters. We like to define the work as post-biographic. The limit between Silvia's biography and Calliope’s is rare, vague, confused. The re-writing we made plays exactly on this. The audience leaves the theatre wondering how much of it is fiction and how much reality. And we like leaving the audience free to hypothesize, believe, overturn. But I don’t think knowing the literature we used as inspiration is essential to understand the show. It stands on its own, it speaks by itself." 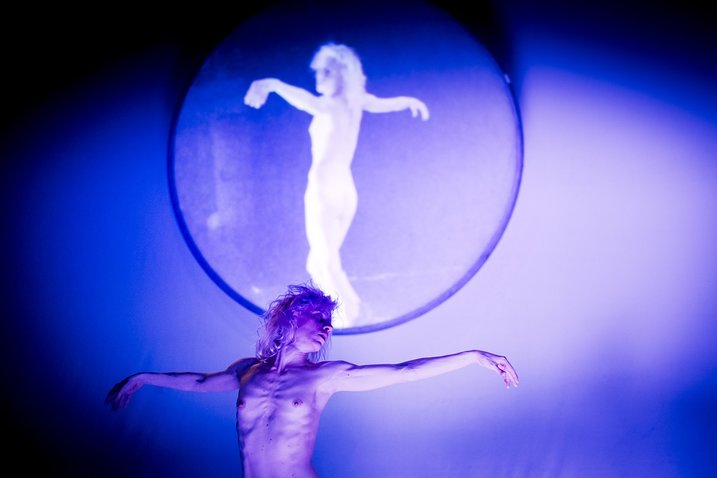 © Simone-Stanislai
Next, Enrico Casagrande explains how the creation took place, influenced by their many world travels:  "For almost a year before the beginning of the rehearsals, we have discussed and collected material for the project. Initially we wanted to create a work about walls (old and new) dividing (and oppressing) various parts of the world… Daniela and I have travelled to Palestine between Bethlehem and Jerusalem, then we followed by car the horrible wall tracing the border with Mexico, from San Diego/Tijuana to El Paso… This research will continue in the new show which will premiere in 2018… But at the time we thought about focusing on the “interior walls”, on those which oppress/alter the perception of the Other, of the “different”, of the stranger… So we decided to focus on the question of gender identity and the fights the LGBTIQ communities of the whole world are conducting to obtain rights and freedom of expression. It is still about overcoming barriers, the rigid rules blocking and circumscribing sexuality in an exclusively binary dimension… Thus we have found our path and – once chosen the scenic device, namely the dj table, the triangular rug and the circular screen, like a mirror – … the birth of the show was quick: about one and a half months of rehearsals between Santarcangelo di Romagna (guests of the Festival) and Paris (at the Villette). It premiered in July 2015 and it has been an amazing creative path and of great mutual trust."

Speaking of this unusual accessory for contemporary art, a DJ table, the collaborators explain how the musical aspect was developped. First, Enrico tells us more about the complexity of this soundscape: "The sound (both meaning music and ambient recording, noise…) has always been a fundamental dramaturgical element for Motus, result of a long registration and mixing work, but with a strong live execution component, which I curate. It is never a simple “sound track” with a pure aesthetic value, but it is an essential part of the narration. In MDLSX the situation is completely different, we started from the idea to use the dj-set as a scenic device asking Silvia to propose an “emotional” soundtrack of hers, linked to specific moments of her life, which I manipulate live with various effects…" Silvia follows with some details about the tracks selection: "In MDLSX, music is not only very various but it actually plays a fundamental role. The playlist is a dramaturgical frame where theoretical audios and family videos are inserted. The tracks selection is linked to topic moments of my adolescence and every piece gives a further contribution, also meaning-wise... For this reason the directors chose to project the songs titles on the screen, this way a further biographical plan is created." 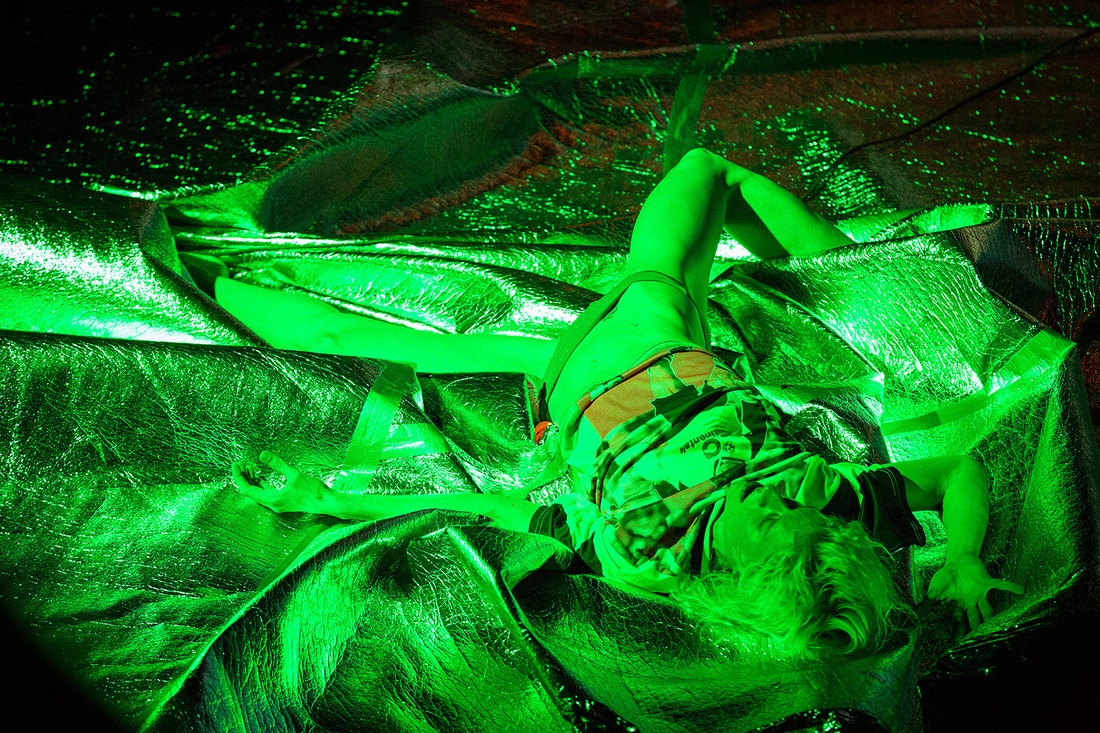 © Renato-Mangolin
Silvia further explains the reason she deems this show to be post-biographical as opposed to strictly biographical and how her actual artistic practice thus influenced this very story: "If we define this work as post-biographic we can say that, as parts of my life are deployed from a narrative and emotional point of view, in the same way there are scenic hues or techniques coming from projects made in the past. Antigone, Ariel, Emma and every other character I went through has contaminated me and that contamination has entered naturally in MDLSX. In the same way MDLSX has influenced our following project, Raffiche. But maybe this is not only a characteristic of mine, but of whoever likes to define him/herself as a performer rather than an actor."
​
The creation explores a theme that is quite misunderstood to this day: gender. A lot has been discussed in mainstream media in the last few years, yet people still generally seem relunctant to accept a diversity in this department. Daniela gives her perspective, citing a few examples of litterature on the subject: "Some texts by Judith Butler, such as the historical Gender Trouble, that criticize the alleged naturality not only of gender, but of sex too, affirming that sex is assumed, not owned, that it is not a simple biological fact, unchangeable, are the basis of the work since gender and sexuality are the performative constructions, in movement. The Cyborg Manifesto by Donna Haraway (written 20 years before MDLSX) was also fundamental exactly for the idea of hybridization, of overcoming the catergories tout-court… But the latest manifestos-texts by Paul B. Preciado have been the turning point. I decided to keep fragments of the Contra-sexual manifesto and of a more recent text titled “We say revolution” that Silvia reads during the show, breaking the narration… because they are declarations of belonging… or rather of non-belonging, of unidentification with the stereotypes and the cages in which the heterocentric society tries to classify all the “different-strange” people, the “wonderful monsters” who peacefully populate our planet and claim respect and equal rights." 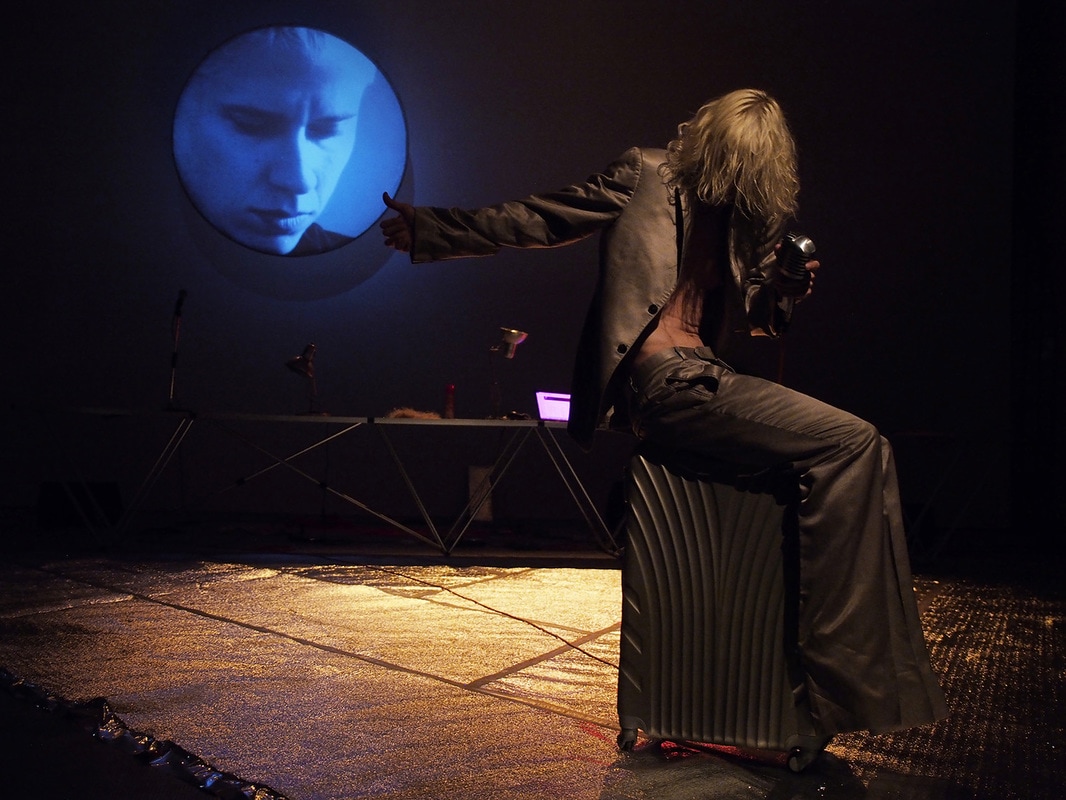 © Alessandro Sala Cesura
When words fail to fully describe what performers wish to transmit to their audience, that is the specific reason we go see them live. To experience rather than intellectually comprehend. Silvia concisely summarizes how this show aims to reach its purpose: "I believe that MDLSX, more than other works, has the strength to explain itself, to put it in words is very hard for me, it is a work which tries to simplify, but not to even out, which tries to move, but not to convince. And this is possible because there are many different levels that are carried forward contemporarily."

Finally, when Motus is done presenting their work in Montreal, they’ll carry on with many exciting projects to pursue their artistic mission. Enrico sums up the next chapters coming up for them: "On Saturday 25th (last day of performance in Montréal) we are going to hold a meeting at Usine C, organised together with Theatre Anarchiste, about the theme of borders, which is something we are focusing on for our next work, Furious Diaspora, coproduced by La Mama NY. The work was born from the idea of starting a collective open reflection upon the human necessity to be in movement, to travel, to move, to discover… to begin new existential adventures Elsewhere, far from one’s own birthplace. We wish to continue with the journey, started with MDLSX, which focuses on the issues of border and conflict: from the tensions on the boundaries that we live within our own body, to the broader conflicts connected to the “interstitial” communities, on the move, from the South of the world. With Furious Diaspora - which is a quote from Paul B. Preciado’s Manifesto “We say revolution” (mentioned in MDLSX itself) - we really would like to start talking about “a belonging open to Multiplicities” in opposition to rigid identity models or, on the opposite side, about intolerance to other identities proposing a post-nationalistic identity for all the populations of the world."

​Armed with this philosophy, Daniela continues with the description of their next piece, currently in the works: "Meanwhile, we are also working on our latest production Raffiche, born from the impossibility of restaging Jean Genet’s Splendid’s fourteen years after our “historical” performance, with a female-only cast. Central here are, again, the themes of identity and revolt, of the refusal to adhere to a preconceived deference towards the separation of reality in male and female. The piece tells of mutating and subversive identities, creatures that have suspended the will to define themselves. Motus generally works on projects and every new one is somehow linked to the previous one, as you can see." For more information about the show, visit Usine C’s website. http://usine-c.com/portfolio/mdslx/