It's hot, come piss in the pool with us!
June 18th 2012
Article about the dance event Piss in the Pool.
- Oliver Koomsatira 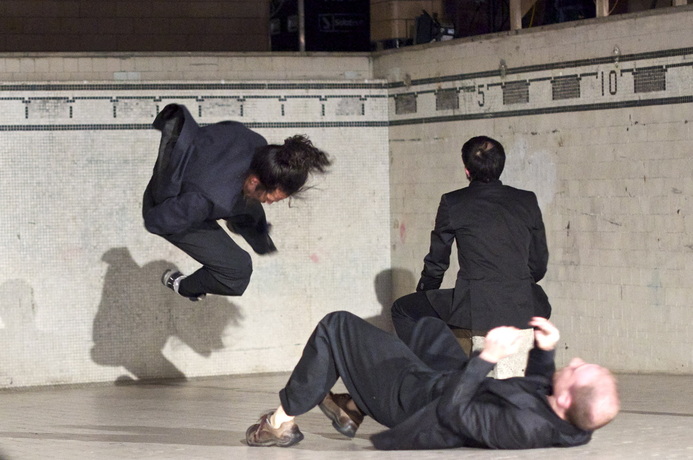 Photography by Celia Spenard-Ko.
9 years ago Sasha Kleinplatz saw a one-man show at Bain St-Michel. She was at that very moment inspired by the architecture and history of the space: it being an empty swimming pool in which artists performed. Her partner in crime, Andrew Tay, the co-artistic director of the event Piss in the Pool, please excuse my language, it's the event's name, shares with us the origins of this event which returns this week June 20th, 22nd and 24th at Bain St-Mathieu: "During this same period we also became interested in creating more opportunities for dance artists to present their work outside of the typical theatre format. We decided to invite two other artists (Dana Michel and Namchi Bazar) to organize the first edition of Piss in the Pool with us. The success of that first edition inspired us to continue with the series."

Many events occur in Montreal, why would another one be of any importance for dance artists? Sasha and Andrew answered : "The event is important for artists on a couple of levels.  Firstly, it gives dance artists the opportunity to create site specific work, and also allows them the opportunity to develop and rehearse this work in the space itself.  For Montreal artists this is a fairly rare opportunity, and comes with a whole new set of challenges and skill sets that are different than creating work in the theatre.  This can be extremely inspiring for dance artists and aid in their artistic development." They have a good point, it's true that rehearsing in an uncommon public or private site can be challenging, especially when you have to deal with insurance issues. It's not an easy task to get the trust of space owners these days, especially with all the ruckus happening in the streets, people are becoming stricter and stricter to prevent any issues.

Any other reasons? They continued: "Secondly, Piss in the Pool is one of the few short form (pieces are usually 10 minutes) dance series left in Montreal. We feel like it is important to give artists the opportunity to create short works where they can often take more risks or concentrate on a single idea. The event has been a springboard for a lot of young choreographers... works that have been presented at Piss in the Pool have gone on to become part of full length works presented at Tangente, Studio 303, Theatre La Chapelle, etc…" Not bad at all! So maybe there is more to this event than just urinating in a public place! Perhaps this event and others like it can actually be the first crucial step for an artist to launch his or her career!

So far so good, so it should be a piece of cake to get this thing rolling, right? Get a bunch of young, hungry artists and just let set them loose on stage. Hm… not so fast, they shared the challenges they've had to face throughout the years to make this event successful: "Producing Piss in the Pool has definitely challenged us to develop our curatorial, organizational, and administrative skills. We have been responsible for securing all of the technical equipment and staff for the production, been the stage managers, front of house staff, hosts, and outside eye for the artists. As the success of the show has grown we have begun to delegate these responsibilities to other collaborators. It's great to be working with a bigger creative and administrative team (this year we are co-producing the show with Studio 303, as well as working with  production manager Helen Simard, and outside eye Peter James)." Now that's very good news, they are beginning to gain credibility and are solidifying relationships with important collaborators. Perhaps this event has no limits…

Anything set for the future? They share: "We are hoping to eventually take our projects like Piss in the Pool and Short&Sweet to other cities in the future. We would love to do a version in another empty pool space in another Canadian city and are currently thinking up ideas to collaborate with Dance festivals both here and abroad." That sounds real nice, everyone has big dreams, however, not so many actually follow-through with the necessary determination and effort to live them out. Will they give up halfway? Andrew Tay shares his immediate plans: "I am going to the Impultanz festival this year in Vienna as part of DanceWeb where I hope to meet other young curators in Europe who are producing similar non traditional dance events in their respective cities. Hopefully we can share ideas, network and talk about possible exchanges. We feel like the kind of dance happenings we create are becoming just as important (especially to the younger generation of dance artists) as dance shows in the Theatre and often are not treated with the same kind of respect when it comes to visibility and funding. Maybe after speaking to European artists doing similar events we can come up with a collective strategy for change." Well… I think they might be serious about making this event last and grow. Will they get the necessary support from the funding bodies and community? Only time will tell…

Alright, enough with the administrative talk. What about the product? Will this event be any fun to watch for non-dance experts? They share their perspective regarding this oh so important question: "Piss in the Pool is a great show for people who've never seen dance. We try to create a show that is multifaceted, representing different elements of the contemporary dance community. The work runs the gamut from theatrical to highly physical, dramatic to comedic." Sounds good so far… anything else? "The MC's and ushers all wear bathing suits, and carry whistles that they use to move the audience between each choreography. This party-like, unpretentious atmosphere tends to put new dance viewers at ease." Alright! Now you're talking! If there's one thing that can turn off non-dance-aficionados, it's probably the historically-accurate-doctorate-post-modern-dance-rooted-jargon-speeches exchanged in the foreign Artiste language, drizzled with incomprehensible allusions to other classical dance pieces and obscure insides, leading to obnoxious I-know-what-you're-talking-about laughter between wine-sipping Premières. People in bathing suits… now you're talking!

Anything else to make us eager to see these weird folks take a leak in the pool? "The feeling of the event is more of a party than a dance show and this year we even have a bar in the pool itself." A bar in a pool? Sounds like a party indeed!

If this sounds like fun to you, it's happening June 20th, 22nd and 24th, 8:30pm at The Bain St. Mathieu, 2915 Ontario E. (Metro Frontenac). Check out their website to learn more about them.
http://www.wantsandneeds.ca/pitp.html